How to understand what cooker hood noise levels mean

Extractor fans and dB levels – what you need to know! Noise is an essential criterion for most when choosing an extractor fan. If it's too noisy the temptation to not turn it on may be too big, which reduces the point of having a cooker hood. The noise level is expressed in dB. The decibel is a measure that we are used to seeing, but rarely fully understand. Specifically for cooker hoods, and the noise measurements undertaken for these, there are some fundamentals you need to know in order to make the right choice. The noise

1) In the past when reading a minimum, maximum and boost decibel number it was often unclear which level was being addressed

Since 2015 both manufacturers and sales points are much clearer in their product communication, helped by the fact that an EU data sheet must be available, so noise information at minimum, maximum and boost level is readily accessible. In addition to this, the numbers are reliable, as the 28 member states of the EU must control the test procedures and the correct transmission of the data. Let us hope that Great Britain will not revert to an opaque situation with regard to cooker hood data when Brexit is completed. In all cases, NeutraTEST and consumer organisations such as “Which” will continue to survey the market and the manufacturers. For the time being you can trust the dB indications!

High frequency and low frequency noise do not bother us in the same way. dB(A) takes into account that sound from low frequency acoustic waves is interpreted by the human ear as being less aggressive than high frequency sound at the same intensity - expressed objectively in dB(SPL). dB(A) balances the sound spectrum in a way that sounds independent of frequency are perceived as of equal nuisance. No less than 6 microphones are used for capturing the noise level at a distance of 1 metre, as described in §7.1.2 of IEC (BS) 60704-2-13(ed.3) and Figure 2 of IEC (BS) 60704-1. These norms are difficult for individuals to consult and they are not free of charge.

3) As a guide, 60 decibel(A) is the level when noise starts to be a nuisance in a conversation

When you double the distance to a noise source, the acoustic pressure is reduced by 6 dB(A). Decibels areexpressed on a logarithmic scale, so your ears will perceive a reduction of 6 dB as a reduction of half in the sound level.

Let us look at an example, taking a cooker hood which is fairly noisy, reaching 70 dB(A) at maximum level. 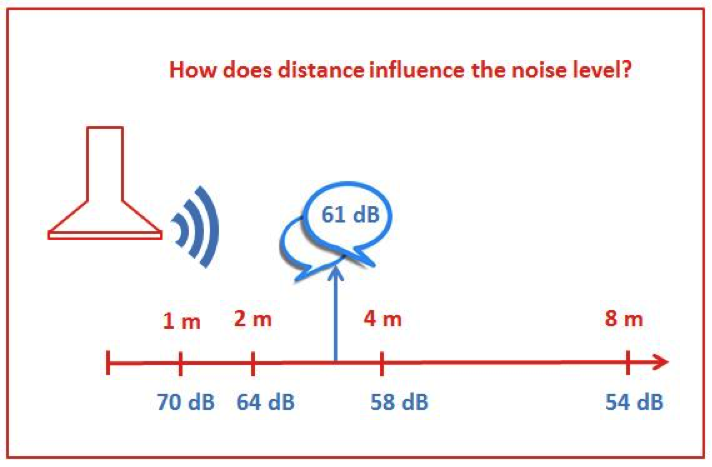 When the pots and pans are on the stove and your ears are somewhere under the hood, then the sound level is clearly above 70 dB(A) and probably close to your UCL (upper comfortable level) if you were to keep your head there for long.

One metre away from the fan you would still find it impossible to have a conversation (unless you are 18 years old with exceptional hearing!). Even at a distance of a couple of metres, understanding the speech of a person standing very close to you would be very difficult.

In our example, you have to be roughly 4 metres away before speech is easily audible and intelligible, as the overall intensity of what specialists call the “speech banana” is somewhere just above 60 dB(A).

If your dining table is situated 8 metres from the extractor hood, the background noise at maximum (bearing in mind that there may also be an even noisier boost level) would be quite audible and harmful for easily understanding a conversation around the table. As the years go by, for each and every one of us the nuisance of a certain definite noise level increases, naturally, because the hair cells inside your ears will break, and your brains will therefore have difficulties capturing speech.

In conclusion, when you are choosing your new cooker hood

... don't forget to think carefully about the minimum, maximum and boost noise levels!

Noise affects our well-being. The noise level of your new cooker hood is an important parameter in your purchase considerations, and is an essential part (30%) of our NeutraTEST Score.